Kurt Seifert , Erlbach was educated as a violinmaker with cellos as his speciality. He learned from Roland Stark and started on his own in 1923. Two years later he got his certificate as a master. After the war he started making guitars as many other violinmakers. He also was a ember of Migma and sold some instruments through them. He worked at some point along with his son Heinz Seifert who became one of the most important and higly reputated of all the (east-)german guitar makers.

More info about them Kurt and Heinz here : http://www.schlaggitarren.de/home.php?text=hersteller&kenn=76

Kurt ( father) Seifert and Heinz ( son ) worked together in the same workshop for many years. In the older days it was Kurt who was the boss , and the guitars were sometimes, but far from always, signed with his name on the label. Later on , when Heinz became the boss, most of the guitars were signed with his name. Im pretty sure many ( maybe most or all ) of the guitars made during Kurts leadership were made by Heinz. Heinz was a guitarmaker while Kurt was better known as violin and cello maker.

The guitars mentioned hee are the ones made , when Kurt was the head oif the workshop.

I have collected pics of signed Kurt Seiferts and looked at them for a long time. Besides that I have done a little “in hand inspection”

I have also collected pics of unsigned  guitars that looks alike the signed.

At first they appear to be quite different but after a little while some similarities becomes obvious.

They are branded as Migma, Parwi, Triumph , Oebra,  Goldklang, Casim and more …

In the following Ill try to describe some diagnostic features. Some of them can be seen also on other brands , but in combination they can be used for sure to tell, if a guitar is made by Kurt Seifert.

The first thing that many of these have in common is the fretboard with bar markers that narrows down to just a narrow line.  I have not been able to find similar fretmarkers  on any other makers  signed  guitars, Heinz Seifert included. It has to be mentioned though that some Wolfrums, which kind of looks like oversized Seiferts, has similar fretmarkers, but since Wolfrums also show other features that clearly distinguish them from Seifert (heel etc) its not important, so imo these fretmarks are  very good indicators to tell if a guitar is a Kurt Seifert or not  (in connection with other features of course).  You can find these fretmarkers on unsigned guitars from Casim and others, and as you will see later they show the very same construction details as Kurt Seiferts , so imo that prooves that they are made in his workshop,- even if they are not signed.

Also notice that there sometimes is a black binding inside the white neckbinding : 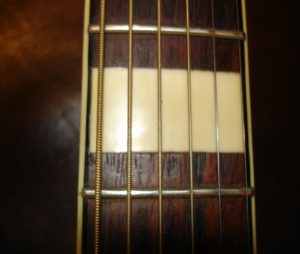 These fretboards tend to have frets all the way up the board leaving only space at the end for a single more fret. And the markers are placed in fret 1,3,5,7,9,12,15,17.

When categorizing the known signed Kurt Seiferts  it seems as if they come in several different sizes.  On the following pic Youll see three different size and shapes. It seems that the left and right guitars were common size and shapes. The smaller at the left and the bigger at the right.  Both of these standard sizes came in “smooth cello carve” as well as “german carve” versions. Both sizes also comes in noncut as well as cutaway versions. 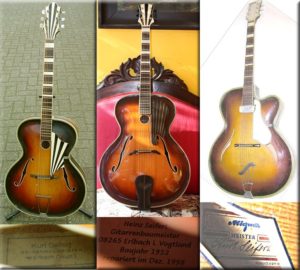 Notice the holes as well,- the “german carved” has clearly Roger inspired holes.  Kurt Seifert definitely adopted some Rossmeisl style like many others. 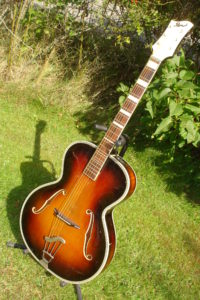 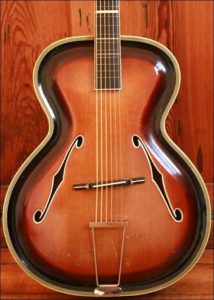 He made many different holes . The one below is the most common used on the labeled guitars in my files.  On the pic above  you can also see sickle shaped hole and an old form. He also used a more Roger inspired hole  ( like on the pic above ) as well as other holes. 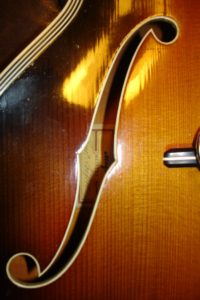 There are two main types of the heels. One is the same as Heinz Seiferts  (often with a stauffer screw )and the other one is a more common type, which probably was used earlier. Its rectangular with rounded corners: 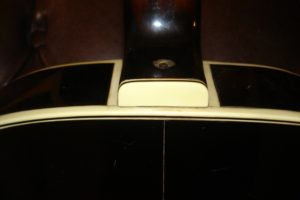 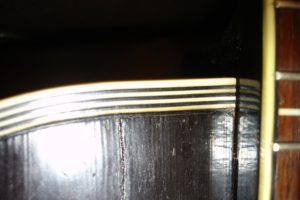 Several bindings were used but this 8 layer with 4 black and 4 white lines were used on a lot of his models  for binding around the top and I have so far not seen a single Heinz Seifert labeled guitar with this binding.

A rare binding also used by other makers :

Other bindings are common types  used by many makers. 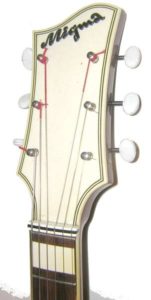 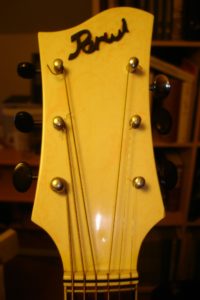 First one is a typical Migma shaped head and then a similar shaped labeled Parwi (with Migma label inside ). They often have one or two narrow black lines around the edge of the white head . Besides Parwi and Migma they can be labeled Triumph, Oebra and other names. The following pics shows  some older types of headshapes. They can also have a black layer on white background and visa versa.

The older heads further down often has black and white rays ( pickguards too ) and quite “special” headshapes. 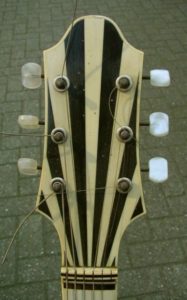 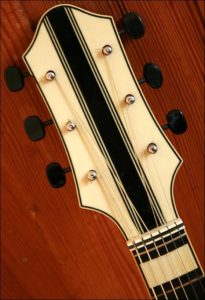 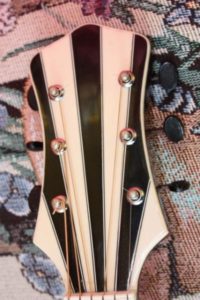 Other details worth mentioning

Some guitars have a triangular deco at the end of fretboard like this : 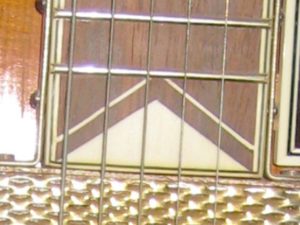 The next type have been discussed in different fora. It looks very similar to  these Heinz  Seiferts : 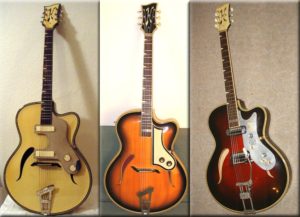 They carry labels from Goldklang,  Oebra and maybe a few other brands, but they are in general not signed by a known maker. In fact most of them  are not signed at all,  but recently I got the message that one was found with a Kurt Seifert signature inside.

Have a look at this Oebra : 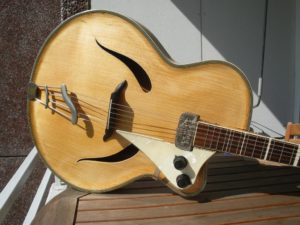 It shows a lot of typical Kurt Seifert features like :

Deco with black line around the edge of the white head that has the typical shape.

This one also has the tailpiece that can be seen on many Kurt’s , but that can be a replacement.

All these features in combination very strongly suggests that this guitar was made in the seifert workshop, and I am personally absolutely sure it’s a Kurt Seifert ( most likely made by Heinz ).

Here some more pics of details : 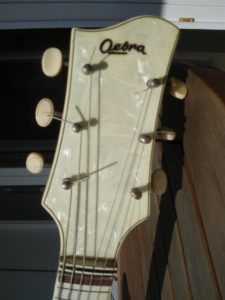 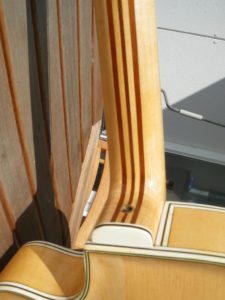 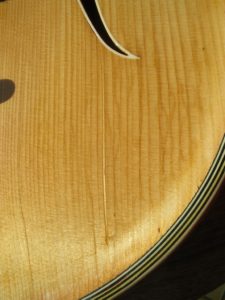 This model also comes with fretmarkers that takes up all the space between frets,. And even if I have never seen a signed Kurt Seifert with that kind of fretmarkers, I strongly believe that they are made in Kurt Seifert workshop.

As already mentioned I think Heinz probably “invented” this style and  later on refined it. But please notice that its only my personal opinion and that I have absolutely NO PROOF !

Two more ( btw . I have now heard of one with Kurt Seiferts name inside written with pencil ) in this style. Both distributed by Goldklang. 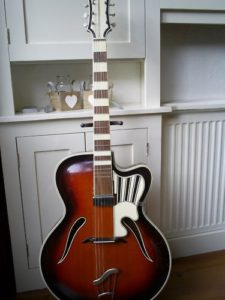 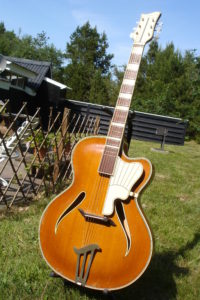 If anyone has info to add I will be very happy .