Glassl was very skillful and is considered one of the topmakers in westgermany after the war. His guitars are not very often labeled with his own name, though a few exists. He made guitars for several brands like Klira, Alosa and especially Hopf.

Identification tricks for the guitars he made from late fifties into the mid sixties.

Here some typical things for the guitars he made from late fifties and into the mid of the sixties. The time before that is more blurry to me, but Ill try to add some about his early postwar guitars later.

In the early days it seems that he used different necks and executed them in various ways, but from the late fifties he got much more consistant. 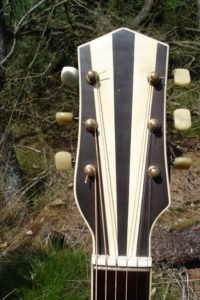 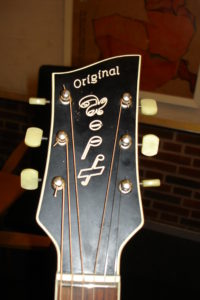 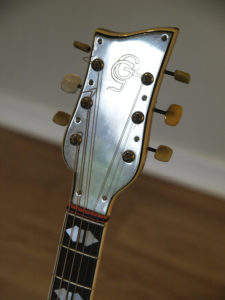 The top of the head is often symmetrical , or when “flared” cut more straight than normally seen on flared headstocks.

The metalplate with GG logo was used on many Hopf topmodels .

Notice also that he liked to make the bottom of the head asymmetrical,- a very special thing, that I dont think I have ever seen from other makers.

Now we move down a bit to the nut area: 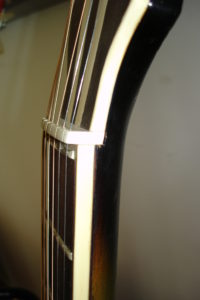 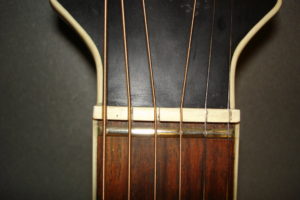 at the left You see that the nut is seated deep into the neck. On the right photo, notice that the neck continue at the same width a bit above the nut. Both things are typical for Glassl, though ( few) other makers also did it that way.

Now from the backside of head: 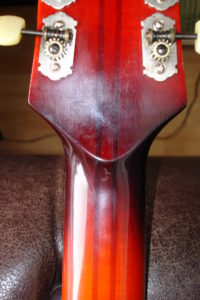 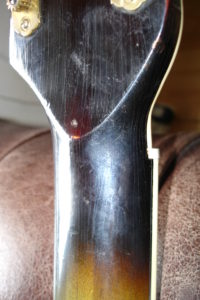 the prominent volute is very pointy towards the body. This is also seen on a few other brands like Astro ( but some of these could have been delivered by Glassl too imo ) .

At the other end of the neck : 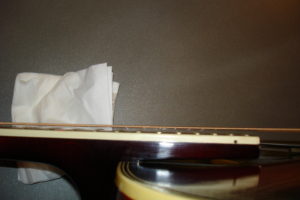 the neckextension is cut straigt and fat. there is no inserted wood in the extension as on most brands. Lang, Roger , Neubauer and some Astro’s ( Glassl made ? ) dont have inserted wood either. In the early days this was different. 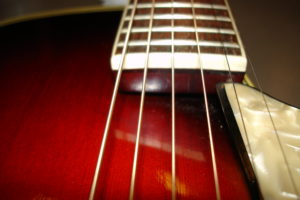 the end binding is radiused like the fretboard. A few other makers – like Neubauer, also did it this way. 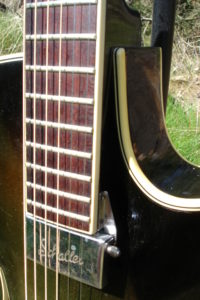 There is a fret placed close to the end of the fretboard. This is a small detail, but still a good hint for Glassl, since not many makers had the last fret that close to the end. 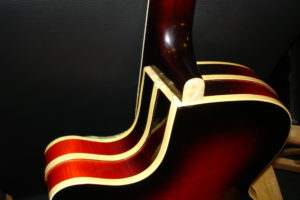 Its said that he was very important in developing the deep cutaway, though Roger Rossmeisl might have come out with one first.

One of his most famous models is the Hopf 320 SL  like here : http://schlaggitarren.de/archtop/restauration-einer-hopf-320-sl-von-herbert-rittinger/

But also the 320 L , which is more like a Lang tribute : http://schlaggitarren.de/archtop/restauration-einer-hopfglassl-320-l/

Here the top models from a Hopf catalogue. ( here the 320 L looks like a model made by Lang himself though ) 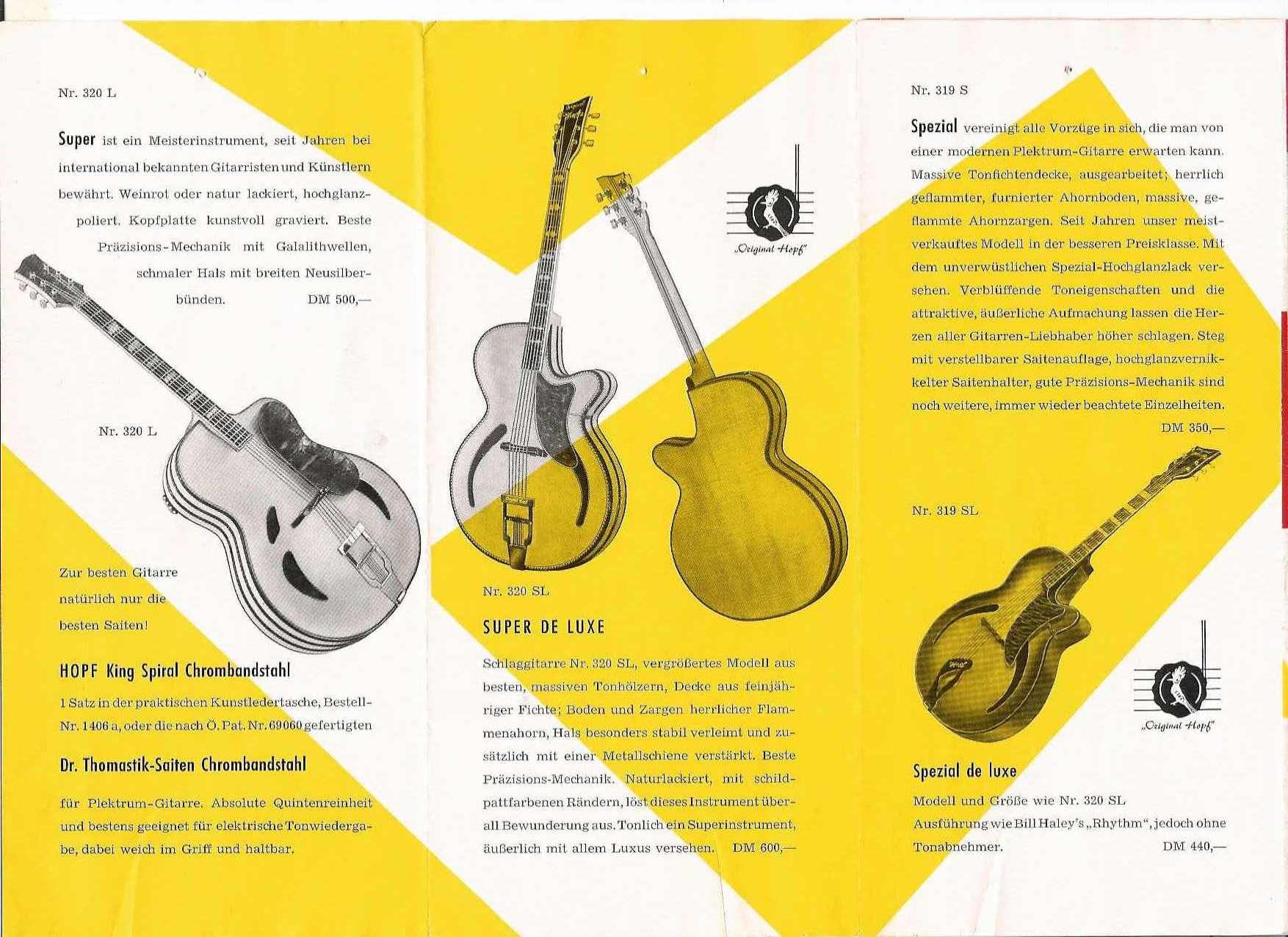 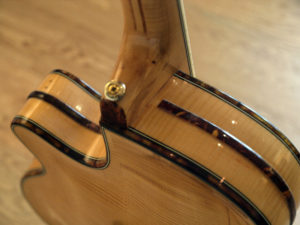 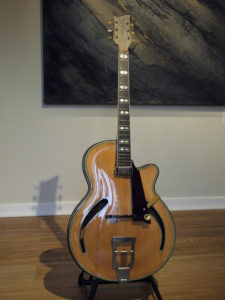 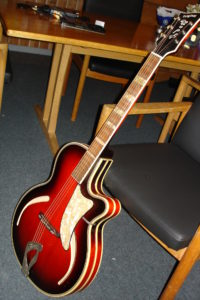 He did however also make a lot of more lowend or average models. They are not often associated with the Glassl name but more with Klira, Hopf, Alosa etc…one of those here ( very close to some labeled Klira and Alosa ) . This one has also a jan.1962 date stamp inside. 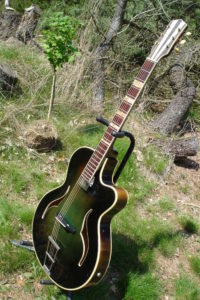 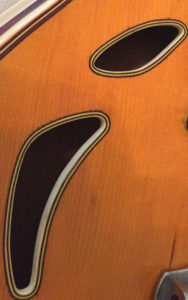 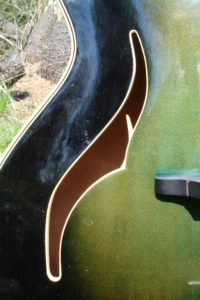 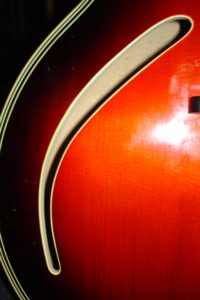 The sickle hole is 20,5 cm long and 2,5 cm wide. I think he used a wider and shorter one on some older Alosa and Hopfs ( 3,5 cm wide and 19,5 cm long ) , but Im not quite sure about that yet. The teardrop hole is also quite narrow, with the sides of the lower end running almost parallel. Thats very Glassl’ish.

He also made f-holes which had round endings ,- I have no photos of these at the moment.

His guitars are handcarved, pressed, and laminated…all kind of variations .