Klira was founded by violin maker Johannes Klier in 1887 in Schönbach, Egerland ( now Czech ). His son Otto Josef took over in 1914.

After the war the Kliers were expelled like the other german speaking part of the population, and they resettled in Bubenreuth were they opened up the business again. Just like Framus and Höfner, but Klira was in fact the first to start a real production in Bubenreuth allready in 1950. They went more in direction of guitars as the popularity of the guitar grew. I have been told that they only produced bowed instruments in the factory, but had acoustic and jazzguitars made by several suppliers and homeworkers. The design of Klira guitars is so specific though ( apart from a few models ) that it makes sense to regard Klira jazzguitars as a genuine brand. Some specific detail I will show below. I also Know that Anton Sandner and Gustav Glassl delivered some guitars to Klira.

The 50ies and 60ies were good times but then the japanese instruments came into the market and they were very hard to compete with…so Klira had to close in 1982. There were still a few instruments produced though.. and Im not sure if you cant still buy Klier violins…

Klira ( and/or the suppliers ) also delivered to other brands. Some can be found as Hopf’s and Triumphator de Luxe is a brand produced by Klira, but sold from warehouse Quelle 1962-71. Jörgensen in Düsseldorf also had relabeled Klira’s in the program as well as guitars from GDR etc… 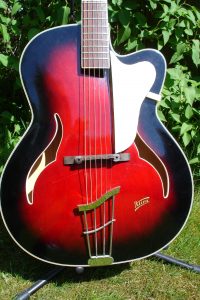 Notice rather flat bottom of the body . Not always like that , but many are. This also shows the fretboardend with room for just one more fret !  Fretboard corners can be both rounded and Sharp.

Neckextension seen from the side most often look like this, thinning towards the end like Höfner and others : 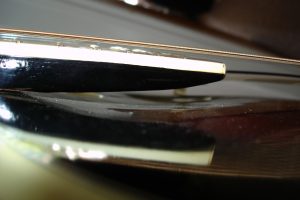 The heel is “standard” and there is room between the cutaway and the heel : 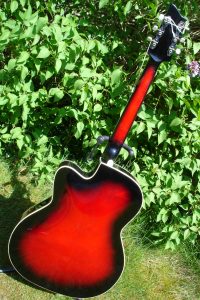 This Photo also shows the caracteristic Klira volute on the head-neck transition. 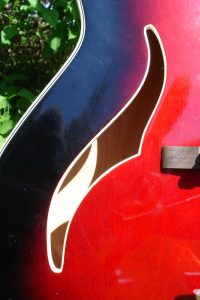 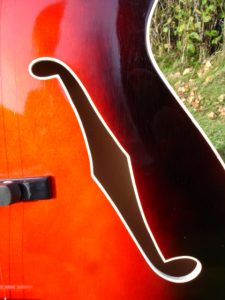