After recognizing a guitar as a eastgerman , the first  detail that I personally look for is the shape of holes. Holes are almost like signatures and just by looking at the shape of the holes you can often narrow the possible number of makers down to a few.  Maybe even nail them exactly…after the holes there are many more details, like bodyshape, volutes, heels, shape of neckextension, decoration, shape of head etc etc..

Never ID from one detail alone, unless its diagnostic… 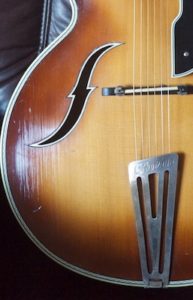 This lightning hole at the left is unique for Osbama guitars.  At the right we have a unique shape for Otwin 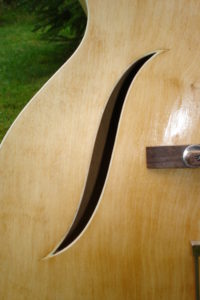 a rather funny one. this is from a Goldon Solist. Something similar can be found on Otwins.

Many older – prewar guitars have these violinshaped holes and the makers are in many cases forgotten…so here only mentioned those who are labeled. 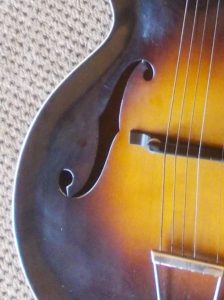 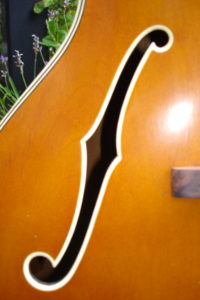 Slightly s-shaped with rather small round upper hole. This is a hole that Ammon Meinel often used. 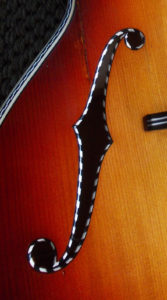 quite straight,sligthly s-shaped with round endings is from W.Pöhland. Also notice the position and that the lower part seems longer than the upper part. 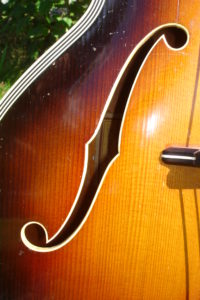 upper part looks longer than lower part. this hole is diagnostic for Kurt Seifert and can be found on Migma, Casim, Parwi and more… They were made in the Seifert workshop when father Kurt was the boss , and often labeled with his name. I think its very likely that they were actually made by young Heinz, but who knows? 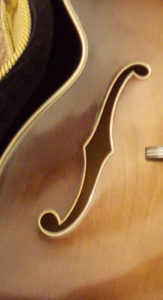 Lower part a bit rounder  and a bit straighter s. Very elegant. This is Graubner ( Herrnsdorf ) 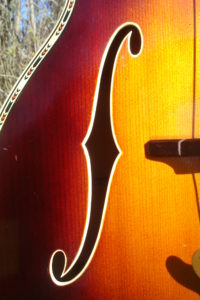 upright, with vertical oval endings. This is from an Oebra. I am almost sure the maker is Max Zimmer , but Im not 100 % sure 😉 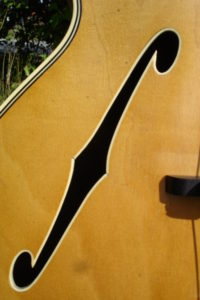 This is very similar to Roger holes in shape, but its shorter around 19,8 cm instead of 20,8 cm. This hole is associated mostlt with Anton Lorbeer, who worked for Musima as Roger “expert” after DDR had made Wenzel Rossmeisl’s Roger workshop into a VEB . 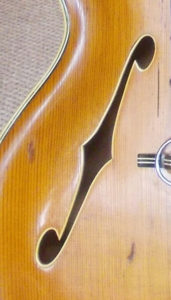 The 20,8 cm long “original” Roger hole. These can be found on older Musima Abassador, Spezial etc.. Also sometimes on other brands from GDR.  Check out the Arcus in the gallery. Many of these are simply made from original Rogerparts. 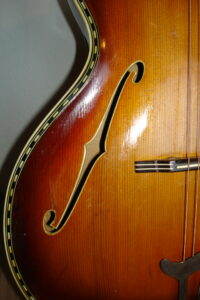 Sickle holes are not so common in eastgerman guitars, but there are some . 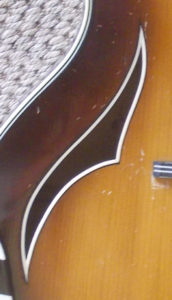 This is from a Graubner made Herrnsdorf.  Kurt Seifert also, on rare occasions, used a sickle hole. Maybe I can add a photo later. 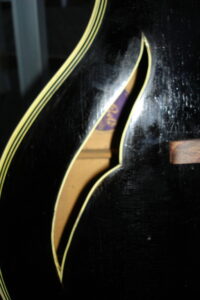 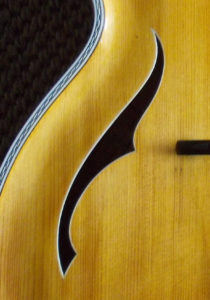 this rather special sickle hole is from a Erich Wander guitar.

In DDR there was a big variety of teardrop holes and spermcell holes, which is not easy to ID , at the moment, but Ill give some examples here anyway. A few are diagnostic for the maker. 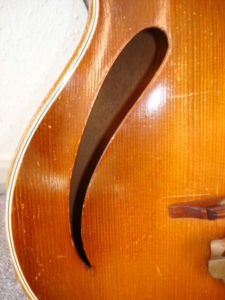 A very old teardrop on a Reinl labeled guitar from the 30ies ( or older ? ). Maybe the worlds first teardrop hole on a guitar ???. The lower end points inwards and there is no wiggle. 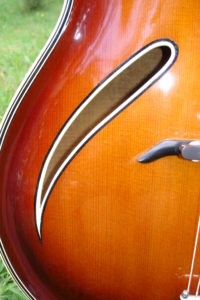 No wiggle, quite long, lower end pointing inwards, notice position. this is one of Herbert Todts typical holes. 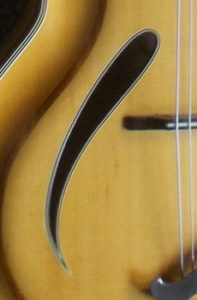 From Musima Record. Notice that its differently from the Todt above. The Musima Record holes are very like Rogers , for good reasons, since they are copied from the material that was expropriated from Rossmeisls workshop.  You can see the Roger holes in the westgerman section. 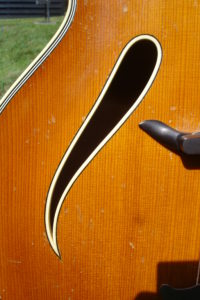 Lower end pointing inwards, a very little wiggle. This is from a Goldklang, which I very much assume was made in the Kurt Seifert workshop. 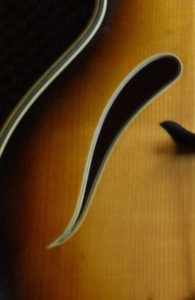 Quite open upperpart and the lower part pointing significantly outwards . This is a typical Heinz Seifert teardrop hole. 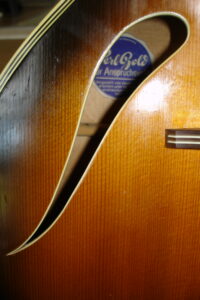 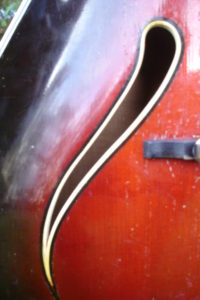 Now more wiggly, lower end pointing inwards and upper a bit outwards. This hole is seen on Aschado labeled models, but I have the idea that they might have been made by Herbert Todt… or they did some swapping or collaboration..anyway …No harm in calling it an Aschado 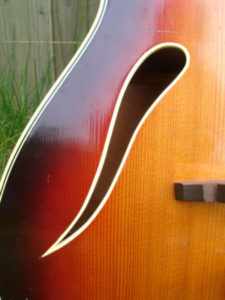 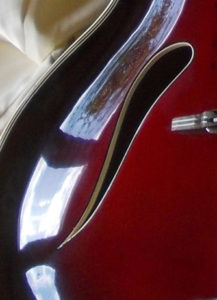 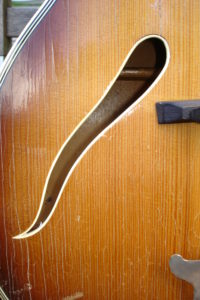 Lower end pointing out and extra wiggly spermcell is diagnostic for the maker Herbert Wurlitzer. It almost look as if its swimming 😉 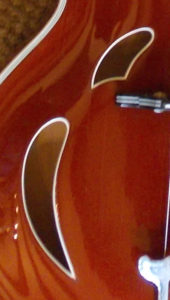